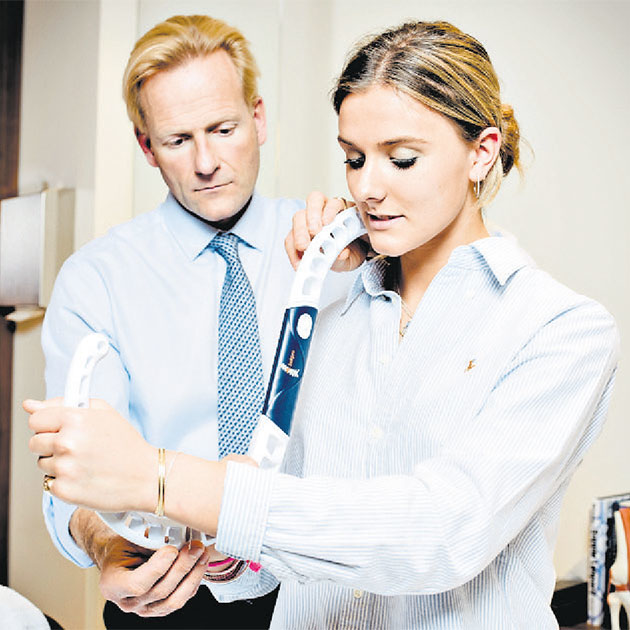 Bad back? You need to kick your bad habits.

We are literally burying our fears, worries and frustration in our bodies

Nick Potter wants to start a revolution. One that will mean any of us can avoid back pain, that will see young people fu-ture-proofing their hips and spines, and that – ultimately – could save the NHS. All we have to do to join in is stand up.

“Sitting is the new smoking,” says Potter, one of the UK’s leading back care specialists and osteopath to elite sportspeople and celebrities. “We’re all becoming very lazy. We’re constantly stressed out. We don’t breathe prop-erly. No wonder the NHS is in trouble. It’s not broken – we are.”He’s not wrong. Eighty per cent of us will have back, neck and muscle pain at some point, which according to figures from the Office for National Statistics, is costing the UK economy £14 billion a year in 31 million days of work lost. Add in the cost of disability payments for back pain (£5 billion) and the £1 billion the NHS shells out in treatments each year, and our spinal situation really is a pain in the neck for the UK.Yet Potter thinks the solution is far closer to home and much more inex-pensive than anyone imagines: “Most back pain comes down to habits,” he says. “We have developed this laptop-latte culture where everyone hunches over their computers at home and on the train. Even in the office, where you may be sitting at an ergonomically de-signed desk, we get so fixed on what we are doing, we start to seize up. Add in some stress, you’re worried about money or the empty nest or job secu-rity, and you start forgetting to breathe.“Plus there is the constant noise, negativity and uncertainty coming into our lives through social media, which is unnerving. Even when you are not online, you know it’s out there. Living in a perpetual alert state like this means we are constantly secreting adrenalin and cortisol into our blood stream. We live in a fright-flight state.

“We are literally burying our fears, worries and frustration in our bodies because it is often easier to deal with a physical pain than to deal with an emo-tional one. This is called somatisation.”Potter’s revolution is based around learning to spot and understand your own physiological bad habits and re-lieve them long before chronic pain can set in. To support that, he has de-veloped a £125 kit called Bakpro, which contains three tools to relieve acuukmuscular pain and teaches stretching and breathing techniques that will re-lease internal tension before more pain has a chance to build up.His interest comes both from per-sonal experience, as well as years of working in elite sport. Potter was an enthusiastic rugby player whose ca-reer ended when he took a gap year in New Zealand in 1988.“I’d played rugby in the scrum from prep school and must have sustained a fracture in my lower vertebrae quite young. But no one realised and I was encouraged to play through the pain, which I did.“Chronic back pain as an adolescent was just something I lived with. But when my back gave out properly on the gap year, the fracture was found and it was too late to try anything remedial. So it was clear I couldn’t carry on. I had intended to go to medical school but spending so much time around osteopaths made me change my mind.” After qualifying at the British School of Osteopathy in 1993, Potter began treating fellow sportspeople including For-mula One drivers Eddie Irvine and Mark Webber and golf leg-end Seve Ballesteros. He worked at the Harbour Club in London where he treated Princess Diana. More recently, his clientele has included Samantha Cameron, Bruce Willis, Miranda Hart and Elton John, who calls him the ‘‘man who taught me how to breathe’’. But many of his patients are office workers, such as the hedge-funders who have acted as guinea pigs for his new regime. “When traders see vola-tility in the markets they get stressed. And stress is not good for them pro-fessionally or personally. They don’t just get back pain like you or I might do, they also become risk averse. Stress inhibits them which is not good for their work.”

Potter recommended that all the of-fice desks were replaced with standing desks and taught staff to breathe from their diaphragms and use breathing monitors to collect data. The combi-nation helped the traders to manage their stress while being open to tak-ing risks. And complaints of back pain disappeared altogether.The idea of losing the office chairs was particularly key. “We all sit down too much,” says Potter, “and have fewer of the gentle rotation movements that happen when we stand up and move about. Our spines stiffen up. The discs between vertebra start to bulge and be-come inflamed. Then all it takes is one sudden unaccustomed twist to cause awful pain.”

He adds: “I don’t think we can talk about back pain in isolation. It’s tied up in stress, which is influenced by every-thing you do: like how you feel about being tall. Look at the way Theresa May hunches forward when she is meeting someone instead of standing tall and using her height and power posture. It sends a strong passive message to those you deal with.”

It can also lead to less obvious ill-nesses, says Potter. “Clenching the muscles in the pelvis is responsible for 96 per cent of cases of non-cancerous inflammatory prostatitis. Women who suffer repeated bouts of cystitis also find that learning to breathe and stretch properly can relieve their con-dition better than taking medication.”

He emphasises we can’t expect our GPs to sort out our health. “They sim-ply don’t have time,” he says. “In the average 10-minute appointment, they just about have time to do basic assess-ments, drug prescriptions and referrals rather than holistic appraisals.”

One of the reasons Potter is so pas-sionate about changing the way we think about back pain is his concern about future generations. “I have a large adolescent practice, many of them hard-working, young sportspeo-ple,” he explains. “But some are over-training, leading to hip degeneration in their 20s and 30s. Others have bad necks and shoulders from staring at screens in bed on a laptop.“We are setting up a whole load of damaged people for the future, who will all present with chronic illness and need care.”So Potter’s revolution isn’t just for the middle-aged, but for the young, too. “The key to everything is observ-ing and maintaining your own body so you can find solutions. Back pain is the result of your habits, not an act of fate.”

HOW TO BREATH PROPERLY

Back to All News and Media

Or alternatively please complete the form below and we will get in touch as soon as possible.